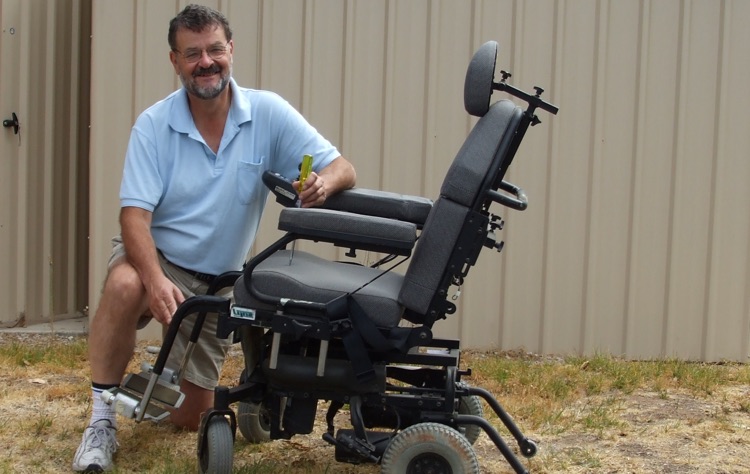 Why did you join TADSA?

I started to volunteer with TADSA in June 1988. I had decided that I had had enough of working for the Public Service, and had started working for myself. My background is electronics, and it seemed that the skills I had developed courtesy of the Department of Civil Aviation could be put to good use helping people with disabilities. I was at a meeting of a computer club and heard a talk from a then member of the TADSA Management Committee. Coincidently, that person happened to live next door to my father, and I was able to find out more about the Organisation. I joined TADSA as a technical member and then as a member of the Committee. In 1992 I became Chairman of the Management Committee, a position I held until 2015.

What did you do during your working life?

I finished my high school days (at Woodville High) in 1964. My father had seen an advert for Radio Technicians-in-Training with the Department of Civil Aviation. I applied and, following an interview and aptitude test, was advised I had one of the eight positions for the following year entry. I had got my Radio Amateur licence a year early so that may have helped sway the panel. In those days, DCA had its own training school on Henley Beach Rd at Mile End. It was a 5-year course and my memories of it were of good times and the freedoms that first jobs and leaving home brought to a teenager.

The first 3 years were about the basics of electronics, receivers, transmitters, antenna theory etc. Nothing to do with silicon chips and only a brief foray into transistor. Those were the days of valves (vacuum toobs!) and high voltages. The last 2 years were dedicated mainly to equipment specific to DCA’s operation. (DCA was responsible for the ground equipment at airports and other sites. This included radars, navigational aids, control towers, Air Traffic Control and Flight Service units, and general control systems). As part of our training, in 4th and 5th years we were sent out for 6 weeks field training. For my 4th year posting, I was lucky to get Leigh Creek – even luckier in 5th year to get Oodnadatta.

When I finished the training in 1968, I was allocated to the Radio Installation section. As the name implies, we put the equipment in and commissioned it. It was then transferred to Radio Maintenance to look after it. The range of work was broad. We were responsible for all sites in South Australia and the Northern Territory. Projects could be as small as a couple of new buttons on the Parafield control tower console to a brand new tower at Alice Springs or a new radar installation at Adelaide. The duration of these jobs could be up to 8 months at a time. Married people were entitled to trips home during the job, but this privilege was not extended to the single men. Like all occupations, there was good and bad. The time away from home was sometimes onerous, but, all things considered, it was a good life.

The roof fell in when I was transferred to the regional office, initially in Da Costa Building on Grenfell St and then at 101 Currie Street. There was a presumption that once you were skilled in doing the actual installation work, you would be even better stuck in an office planning the jobs. This didn’t sit well with me as I have always preferred the practical side of the work and couldn’t stand being desk-bound in an office. I suffered it for about 2 years but that was my limit – time to escape. Around this time, the Personal Computer was appearing on the scene. An Australian company was starting to produce the Microbee computer and had need for a service tech in their store in Adelaide. So I took long service leave and never went back! After 19 years, I was no longer a public servant.

Working for a small company like Microbee was entirely different from my Public Service days. However, like so many small technology businesses, they couldn’t maintain the financial burden. In 1986 I went on a holiday to Hong Kong and when I returned, the shop was shut. I was aware that there were many Microbee users in Adelaide, so I offered to clean up the shop in exchange for the servicing stock and equipment. The parent company in Sydney agreed, so, one weekend, I spent many trips in the VW Golf transporting the entire service department home. I already had my own registered business name so I advertised that Microbee Service was still available. Thus started my life as self-employed that has continued to this day.

It was about this time that I joined TADSA. I had heard about the organisation and thought there might be opportunities in the disability area for a small one-man business. As it turned out, this was to be the case. Over the following 30 or so years, I have managed to survive on the income of my business. Over the time, I have developed and made a number of devices for the disability sector. This has included electric door openers and locks which were my main stay until the State Government stopped funding them for users. I also produced electronic equipment for people who grew “plants” hydroponically (!!). It was the flexibility that you get being self-employed that enabled me to be involved with TADSA not only as a volunteer technical member, but also for many years on the Management Committee

I still get asked to look at electronic equipment that no-one can fix. These are always challenging but I put my success down to the excellent training that I received so many years ago in my early days.

It is difficult to name one project amongst the many I have done. It is very rewarding to see a piece of equipment that you have been involved with from the start successfully addressing the needs of the user. The sorts of devices I have made over the years range from the simple, such as a modified TV remote controller to more complicated ones, such as a talking blood pressure meter. We often get involved in coming up with ways of operating switches, such as for nursing home call systems. Most projects are memorable until the next one comes along.