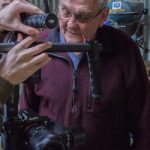 Eric joined TADSA in August 2010. He’s known for his quick wit and we enjoy his banter when he comes into the office. Eric was one of the ‘stars’ of our last promotional video in which he was filmed in his shed (pictured below ‘on set’) talking about one of his projects- mini parallel bars (also pictured below). Watch the video here.

Why Eric joined TADSA
After he retired in 2005 Eric did what most retirees do and that’s travelling and doing things around the house. Eventually, he got “tired doing nothing” and said to his wife Clare that he might volunteer with Meals on Wheels. According to Eric, Clare was concerned that he would be “sitting around all day eating”.
In August 2010 Eric saw a notice in his local Messenger newspaper advertising the TADSA volunteering opportunity. With his technical background Eric thought he’d give it a go.

What Eric did in his working life

Eric joined the South Australian subsidiary of the UK parent company Lamson Engineering at the age of 17 and stayed for 47 years – the last 15 years as Manager. Some of the equipment Eric worked on included conveyor belt systems, air tube systems which are used in supermarkets to transport money, and in hospitals to transport blood samples, trans cars which are small robotic vehicles used in factories and hospitals, and dictographs, a type of intercom (seen very often in British films about Scotland Yard).

Eric doesn’t actually have a favourite project. He says it’s not the projects you remember it’s the people. “I’ve met some wonderful people who have some big challenges and it makes you think what am I worried about?”. It’s not surprising Eric doesn’t remember all his projects, he’ done over 60 of them.