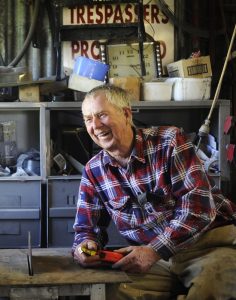 Joe joined TADSA in 1991. He’s worked on many projects since then, mostly in metalwork – from small modifications on larger items such as beds and tables to modifications on small items such as cup holders and cutlery. He’ll readily tell you his shed is a bit of dump – but it’s produced some very useful devices, each one of them custom made inventions.

Why Joe joined TADSA
As Joe was getting closer to retirement he thought about what he should do. He can’t remember how he found out about TADSA but he does remember attending his first meeting and joining up right then and there. That was 28 years ago.

What Joe did in his working life
Joe was a truckie for a South Australian transport company and before that he drove semi-trailers interstate.

Before he was driving trucks, Joe was in the building industry. Quite a few landmarks that South Australians would recognise are structures he installed. Perhaps the most recognisable one is the roof on the clock tower at the Elizabeth Shopping Centre. If you look closely the roof has some fancy work on top of the clock tower – next time you’re there look up and you’ll see Joe’s work. His recollection of the time goes back to the days before safety harnesses. He remembers his roofing mate climbing up inside the bell to get to the top.

If you’re driving past the Queen Elizabeth Hospital you may see the big QEH letters on the front of the building. In fact you don’t even have to drive past the hospital to see them – they often appear on the nightly news! It took a couple of days on swinging scaffolding to get those letters firmly in place.

The big copper dome on the Greek Orthodox church in Franklin Street and the windows in Flinders University are some of the other things you might recognise around Adelaide that have the “Joe touch”.

Joe’s most memorable project
One of Joe’s most memorable projects was one of his first. The mum of a young lad name Oliver requested adjustments to a chair so that her son, about 3 years old at the time, would be able to sit up straight. Joe modified the chair so that it was fully adjustable and would suit young Oliver until he was 14 – 15 years old. Joe suggested further modifications beyond those initially suggested and made the chair to be at the right height at the dinner table. This enabled Oliver to sit at the same height as his family at mealtime.

Another memorable project for Joe was a more recent one for a 32 year old paraplegic woman. Each time she went in the pool, her carers would need to take her weight to get her in and out. Joe made 4 steps that enabled her to move from her wheelchair to the pool. Her carers no longer need to take her weight and she can be more independent and more in control. Joe built the metal steps and TADSA Volunteer Theo Van Deventer worked on the waterproof upholstery.

Joe is pictured in his well used shed and the pool steps are pictured below. 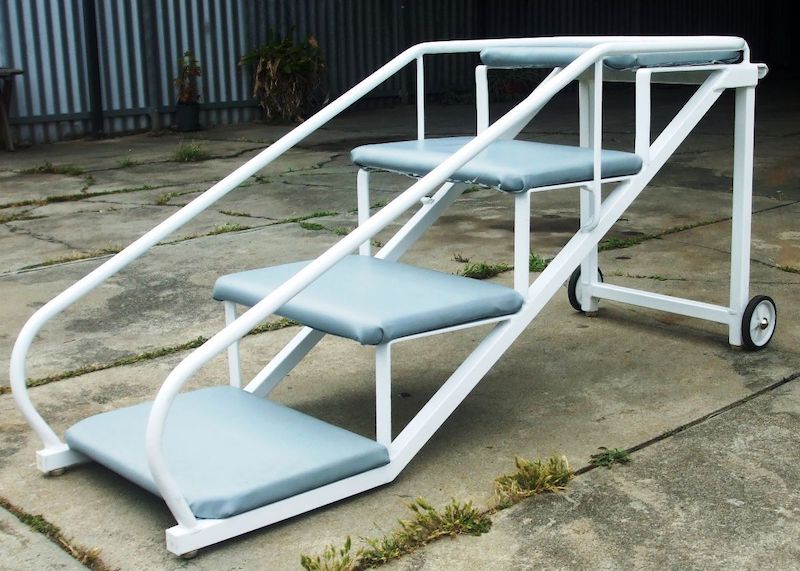