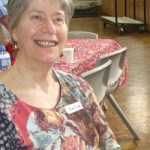 Maxine joined TADSA in 2015 to assist the then Management Committee with administration and office support. She has helped with the development and review of policies and procedures, taken minutes at meetings, and was involved in the governance change to a skills based Board.

Why Maxine joined TADSA
When Maxine completed her paid employment she needed a new activity to keep her mind active and to provide a social outlet. Volunteering her multiple skills at Red Cross, MS Society and then TADSA met both these needs.

What Maxine did in her working life
Maxine began her working life in a government department typing pool with the Department of Lands. Her professionalism and skills saw her progress quickly becoming Personal Assistant to the Deputy Director-General of Education. Maxine says “in those days (the late ’60s) there were no such luxuries as computers or photocopiers. Most correspondence was dictated and taken down in shorthand, then typed on a manual typewriter and copied using a Gestetner machine.” She’s not sure why they were affectionately called the ‘good old days’!

Maxine was employed in various other administrative roles throughout her working life, the majority of which were in the university sector. She worked for many years as the PA for the Dean of the Faculty of Environmental Design at the University of Canberra, followed by some years acting as Minutes Secretary for the Vice-Chancellor’s Advisory Committee and the University Council. On moving back to Adelaide she was employed for several years carrying out an administrative role for a medical research trial being undertaken at the University of Adelaide.

What Maxine believes to be her most significant contribution?
Maxine believes one of her most significant contributions has been a slight evening out of the TADSA Volunteer gender balance. This still needs some work. She says she tried hard to keep outgoing CEO, Nick Carusi in line “with mixed success” she implies wryly. However, they remain friends since his recent retirement so she thinks she must have done something right…